An unfortunate result of too much time, too much fear and reduced number of professionals on handling both medical and technical information about SARS-CoV-2 and its resulting disease, COVID-19, is probably hiding the biggest problems yet to come.

A few weeks back, a new strain of COVID-19 appeared in the U.K., this time, being more widespread before it was detected in the general population than the mink-associated variant strain which appeared in Denmark mid-November and led to 17 million minks being killed to contain further spread (1, 2, 3) and the fears of this variant being easier to spread, as announced by the British Prime Minister (1, 2, 3) early in mid-December.

These announcements followed by the media’s coverage led to an unwarranted panic, to the point where WHO officials publicly stated when they were in contact with UK officials, and made a joint effort in informing the public neither vaccine had evidences it would be less effective nor the scientists saw evidence that would lead them to believe it could be more deadly. (1, 2, 3, 4). The rumors of it already being the U.S. stealthily further fueled the proportional response to tickle your adrenaline levels to a degree where I can see fatigue and unresponsiveness becoming incresingly more probable. The problem with that fact is that once we do find worrying evidence, we may not care or give as much attention as we should.

The issue? That may be already happening.

The probability and significance of the COVID-19 genetic variance is remarkable, with the main field of research being the capabilities of virus ability to evolve and improve to circumvent our most efficient countermeasure, vaccination. In 13th October 2020, a paper under the name of Chen, J., Gao, K., Wang, R. and Wei, G., 2020. Prediction and mitigation of mutation threats to COVID-19 vaccines and antibody therapies. (arXiv preprint arXiv:2010.06357), this paper studies over 1800 mutations and the possibility of the virus, SARS-CoV-2, developing worrying characteristics.

In the paper’s conclusion, it states the following:

From that conclusion, there are two main takeways:

In it the authors make a collective effort to improve the lethality of the virus in an test using rats, by the end of paper’s work they had a strain of SARS-CoV-2 called MASCp36, which had mimicked consistently the symptoms presented by those who were affected by the most severe cases of COVID-19. An interesting observation is the genes used by these researchers to achieve that:

Deep sequencing identified three amino acid mutations, N501Y, Q493H, and K417N, subsequently emerged at the receptor binding domain (RBD) of MASCp36, which significantly enhanced the binding affinity to its endogenous receptor, mouse ACE2 (mACE2). Cryo-electron microscopy (cryo-EM) analysis of mACE2 in complex with the RBD of MASCp36 at 3.7-angstrom resolution elucidates molecular basis for the receptor-binding switch driven by amino acid substitutions. Our study not only provides a robust platform for studying the pathogenesis of severe COVID-19 and rapid evaluation of coutermeasures against SARS-CoV-2, but also unveils the molecular mechanism for the rapid adaption and evolution of SARS-CoV-2 in mice.

So it seems the gene K417N is important to vaccine efficacy and its interactions with possible mutations at N501Y could make it dangerously lethal. Also keep that in mind.

South-African health authorities and researchers, joined in by another 21 international research laboratoratories, including respectable and with significant work in other multiple diseases such as the FIOCRUZ institute, published at 22th December 2020, a paper called: ‘Emergence and rapid spread of a new severe acute respiratory syndrome-related coronavirus 2 (SARS-CoV-2) lineage with multiple spike mutations in South Africa’. This paper was actually my start point, due to how unnoticed it got during its pre-release and then further print at medRxiv, despite the implications it brought. In this paper, they identify a new variant which was significantly different from the UK variant, the draft, already in pre-publication, circulated through the scientific channels rather quickly, while the general public still seems oblivious to the fact that this new strain is considerably more dangerous.

The details are in the paper are concerning for multiple reasons:

If you were to recall the previous part of the article, all three are heavily implied when alone, to be able to lower vaccination efficacy in theory, and generate more a higher fatality ratio. The only the UK variant and the SA have in common is the N501Y gene, the less worrying when alone, but in the SA variant, the virus has both N501Y and K417N mutations, as the ones used to produce a very fatal strain of the virus under controlled settings. 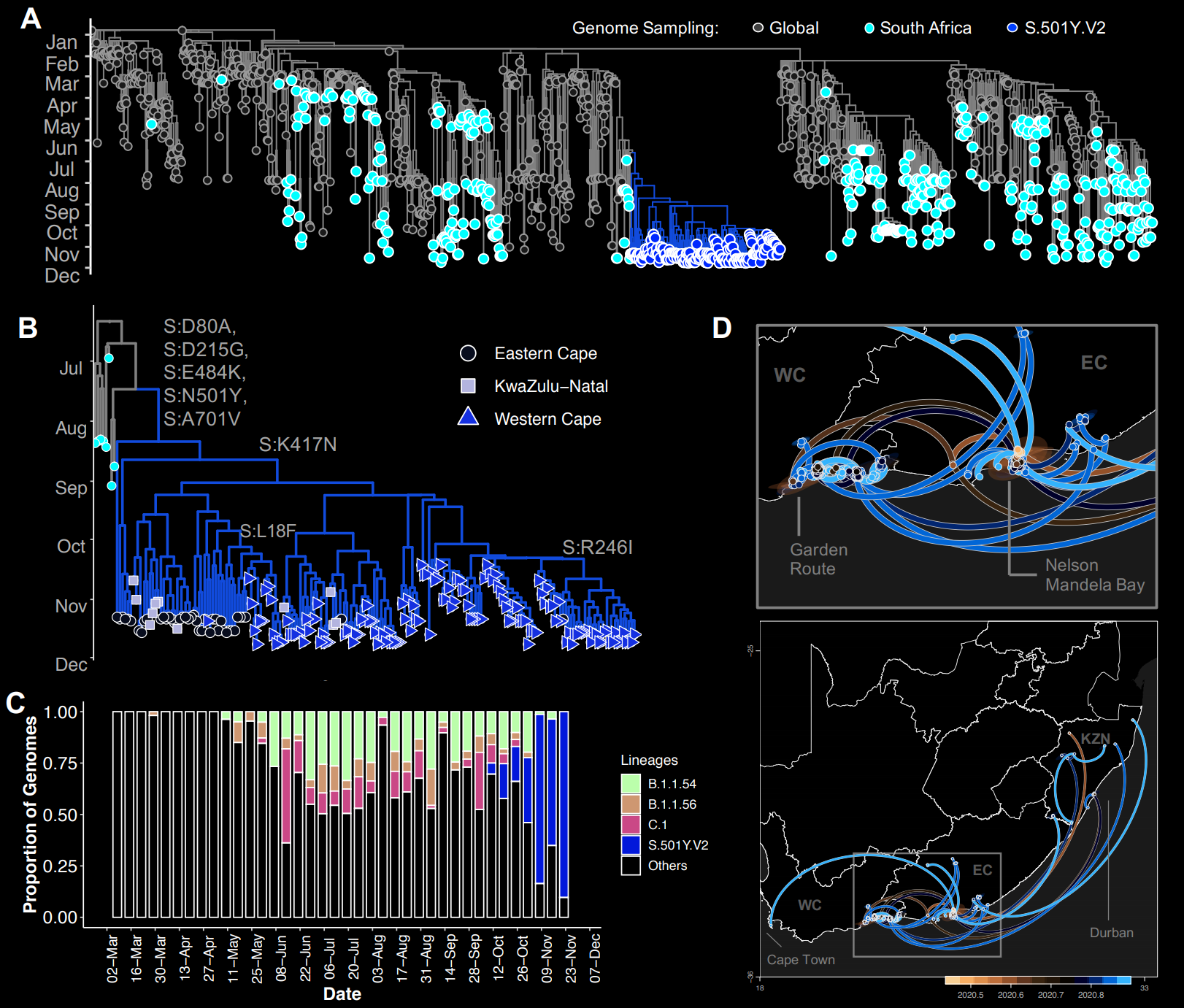 Figure: Evolution and spread of the S.501Y.V2 cluster in South Africa. A) Time-resolved maximum clade credibility phylogeny of 1350 SARS-CoV-2 sequences, 647 of which are from South Africa (red). The new SARS-CoV-2 cluster is highlighted in yellow. B) Time-resolved maximum clade credibility phylogeny of S.501Y.V2 cluster, with province location indicated. Mutations characterizing the cluster are highlighted at each branch where they first emerged. C) Frequency and distribution of SARS-CoV-2 lineages circulating in South Africa over time. D) Spatiotemporal reconstruction of the spread of the S.501Y.V2 cluster in South Africa during the second epidemic wave. Circles represent nodes of the maximum clade credibility phylogeny and are colored according to their inferred time of occurrence. Shaded areas represent the 80% highest posterior density interval and depict the uncertainty of the phylogeographic estimates for each node. Solid curved lines denote the links between nodes and the directionality of movement. The date scale goes from July 2020 (2020.5) to November 2020 (2020.9)

And one of the most important takeways about this strain is the fact that it hasn an incredibly low probability mutation. If everything about it doesn’t worry you significantly (and rightly) more than any news related to strains so far, don’t take me word for it, a few specialists had a lot to say about this subject:

“The mutation that has cropped in Africa has been seen before, and we have no idea whether it impacts on virus transmissibility or immunity. We need to study the impact of mutations on virus behaviour, but until we have performed those important experiments we should avoid panicking. If we practice social distancing and limit interactions with others, then we will avoid spreading the virus, no matter what collection of mutations it has.”

“The ’South African’ variant is distinct from the UK variant, but both contain an unusually high number of mutations compared to other SARS-CoV-2 lineages. Some of these mutations change the S protein, which is cause for concern. Both contain the N501Y mutation but so do many other variants that do not appear to have increased transmission, so the picture is complex. It is critical to act quickly to ring-fence a high-transmission infection to prevent it from becoming established, so the precautionary quarantine of those who may have come into contact with the SA variant is vital for this. The importance of real-time genomic surveillance to understanding patterns of disease is evident. The UK has used genomics throughout the pandemic and thus was well placed to identify the new variant early during its rise. In other countries that do not have this capacity, it is quite possible that these variants are already in circulation, but currently unidentified. It appears we are entering a particularly dangerous phase of this pandemic, making the effective roll out of the vaccines even more time-critical.”

“The South African virus variant was recently reported in a preprint1 ahead of formal publication. The variant has multiple spike mutations and emerged in a major metropolitan area in South Africa following the first wave of the epidemic and then spread to multiple locations within two other neighbouring provinces. It has rapidly spread become the dominant virus variant in the Eastern and Western Cape provinces. The variant has 3 mutations at key sites in the receptor binding domain (K417N, E484K and N501Y) of the spike gene. Two of these (E484K and N501Y) are within the receptor-binding motif (RBM), the main functional motif that forms the interface with the human ACE2 receptor. The N501Y mutation is the same as that found in the UK virus variant. What these changes mean for the infectiousness of the variant virus (trans “Variants of SARS-CoV-2 have been around since the beginning of the pandemic and are a product of the natural process by which viruses develop and adapt to their hosts as they replicate. Most of these mutations have no effect on the behaviour of the virus but very occasionally they can improve the ability of the virus to infect and/or become more resistant to the body’s immune response. Many thousands of these mutations have already been identified in isolates of the virus with around 4000 spike mutations being found in different viruses from around the world. The UK and South African virus variants have changes in the spike gene consistent with the possibility that they are more infectious. But the standard measures to restrict transmission (hands, face, space) will prevent infection with this variant. Along with improved surveillance (testing, tracing and isolating) and expediating the roll out of the vaccine, these measures will prevent transmission of this variant and any others that will arise. The move to harsher levels of restriction across the country is inevitable. It is essential that we do everything possible to prevent the South African variant from spreading to the UK population. Quarantine measures and restricting travel from and to South Africa are imperative.”

- Source of all quotes

Considering all this information, one should not even blink.